Raise a glass to Merlot 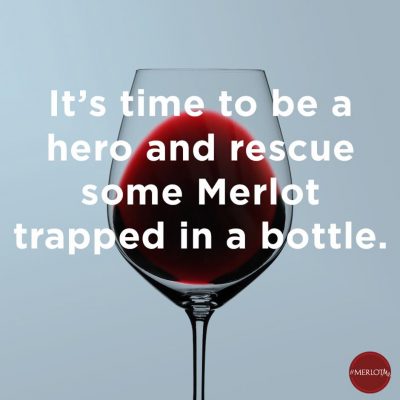 It’s International Merlot Day on 7 November, the perfect reason to discover a bit more about this red wine – affectionately known as “liquid velvet” round these parts!

Apparently the first reference to Merlot dates to around 1784 in Bordeaux. Surprisingly, Merlot’s history in New Zealand dates back to the mid-1800s, although the wine didn’t emerge as a popular variety until the 1980s and 1990s.

Merlot is the second most planted red grape in New Zealand after Pinot Noir. It was made famous in Bordeaux where it is the most widely planted grape and the name is thought to come from the diminutive of merle, meaning blackbird in French – presumably due to the dark colour of the grape.

The New Zealand Merlot differs from the original Bordeaux, as do most New World varieties, because of the focus on late harvesting which produces a full-bodied, high-alcohol velvety wine. Some Bordeaux producers follow this approach too, but the traditional Bordeaux style maximises the acidity levels of early harvesting to make a fresh, medium-bodied red fruit wine.

Merlot’s popularity took a hit in 2004 with “that” one-liner. For those who haven’t seen the movie, one of the lead characters, Jack, tries to get (wine snob) Miles to join him and drink a glass of Merlot, to which Miles replies “If anyone orders Merlot, I’m leaving, I am NOT drinking any (expletive) Merlot!”

Despite director, Alexander Payne insisting it was “just a joke” the impact of the line was such that Merlot fell sharply in the popularity stakes. “People called it the ‘Sideways effect on Merlot,’ ” says Steven S. Cuellar, chair of the department of economics at Sonoma State University.

As a result, these days, Merlot has become an under-rated variety. We are delighted to see calls for renewed appreciation for Merlot – and to see the likes of (Master Sommelier) Cameron Douglas championing it’s cause. Check out www.merlotme.com to find out more and to become a supporter!

What’s to love about Merlot?

What’s not to love about it? It’s a variety that is round, complete and ever so easy to drink. One winemaker we know refers to it as a “cuddly” variety, while another Marlborough winemaker calls it “liquid velvet”.

Sadly, there are fewer Marlborough-grown Merlots around these days. A number of Marlborough wineries (such as Peter Yealands and Babich, to name just two) make very fine Merlots from Hawke’s Bay grapes. Others, such as Hans Herzog, make great wines with Merlot as part of a blend.

However, the ones we’ll highlight today are made with Merlot grapes grown in Marlborough:

A scrumptious mix of blackcurrant, redcurrants, leather and red plums in a bottle. The wine is ruby red in colour, with a light purple on the rim. The 2014 vintage is mouth-filling, smooth and easy-drinking, with a nice long finish. We think it would be a great match for wild game, or perhaps a nice steak on the barbecue on a summer evening!

The dark chocolate notes in the Rapaura Reserve Merlot get us every time. (Anything combining wine and chocolate has got to be amazing, don’t you think?) Couple this with a round, rich mouth-feel, loaded with blackberries, Black Doris plums and a touch of smoky oak and you’re on to a winner. And we’re not the only ones to think so – it has won gold medals at the Air New Zealand Wine Awards a number of times, and has been widely awarded in other competitions.

For those coming along on one of our wine tours, we love to showcase the best the region has to offer – whether that be Merlot or Montepulciano, or something in between!

The light of a bottle

Whether it was Merlot Neruda was referring to is debatable, but if you’d like some insights and intelligent conversation about Merlot in Marlborough (along with the region’s other great wines) – give our expert team at Sounds Connection a call today.