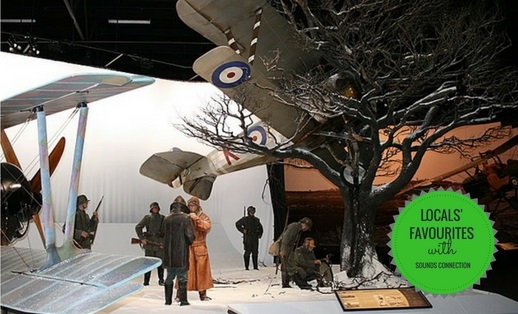 We’ve been sharing a few ‘secrets from the locals’ lately – with some favourite destinations from around Marlborough, and here’s our latest: the spectacular Omaka Aviation Heritage Centre.

While not exactly secret, this world-class visitor destination houses a stunning World War One aircraft exhibition which features the aircraft collection of Sir Peter Jackson – New Zealand’s Lord of the Rings maestro. The LOTR connection doesn’t end there, as Sir Richard Taylor’s Weta Workshop has always been closely associated with the centre and instrumental in putting the incredible WWI scenes together. With this sort of talent involved, you know you’re in for a treat. Time and again it proves a big hit with all ages and is often requested and visited on our private and personalised tours.

The “Knights of the Sky” exhibition is vast – it’s one of the world’s largest collections of WWI aircraft and rare memorabilia, including flyable planes. While we love the whole museum (it feels a bit like a giant lifelike movie set!) one of our favourites would have to be the snowy ‘aeroplane in a tree’ display, where you can see a Royal Flying Corps Nieuport biplane which has been damaged in a dogfight with a German Siemens Schukert.

There’s great excitement at Omaka as another exhibit is soon to join the first – “Dangerous Skies”, featuring World War Two aircraft, is currently being created by top craftsmen from Weta Workshop. Opening in October, “Dangerous Skies” will feature the first female fighter pilots along with the only flyable Avro Anson Mark I bomber, as well as a Hurricane, a Stuka and a Spitfire. We look forward to sharing this exciting new exhibition with our visitors! And then there’s the Classic Fighters 2017 coming up at Omaka, but we’ll have more about that for you soon…

The Omaka Aviation Heritage Centre has been a popular spot for all sorts of visitors to New Zealand, including the Duke and Duchess of Cambridge in 2014. If you want to discover this masterpiece for yourselves like William and Kate did, get in touch with us today.